I’ve always told Francesco that he has an ancient face.
He’s got that kind of beauty, that is mysterious and timeless. Once I told him he seems to have come out of a Flemish painting. He certainly doesn’t have an Italian face and the deep red of his beard and the pale green colour of his eyes, remind more of a Nordic person.
What a blessing having him by my side! He seems to have been born to be portrayed with his melancholic beauty and his delicate hands. I don’t think it’s just a coincidence that I like him so much. After all, our tastes mirror what is around us, what we have absorbed around us during the years and what makes an impact in our lives. He complements very well everything that surrounds me with a naturalness that is only the result of his own uniqueness.When I was a child I used to flick through the thick books from our bookshelf, which was overflowing with art history books, artists’ monographs and painters’ biographies. In those pages, in the painting reproductions, there were the same eyes as his. White hands as his, red beards and nose with a fine profile as his. I was already in love with all of them, as if they were characters from the cartoons which I have never watched. I’ve never forgotten those faces, nor the dark interiors where they were often depicted, illuminated only by a candle light. Their pale skin on a dark background. Lights and shadows. Unforgettable contrasts. They are all fascinating and mysterious, wrapped up in an almost esoteric aura exactly like Venice itself. Venice with its fragile skyline and its enigmatic beauty. Its precious and solid architecture, a contrast of ancient magnificences that have unstable features. Venice is an esoteric city that has not only been marked by the passing of several intellectual people, but also by Freemasonry, obscure characters, and necromancers but also ordinary adventurers who found in Venice a shelter from the Catholic Inquisition. Only a few people know about the occultists, or about the clairvoyants, the plotters, the profiteers, the followers of black magic practices who inhabited the city on the lagoon. What has remained through the centuries, however, are not just passed on stories which were distorted and, in the end, they derived from some old folktales, but also symbols, paintings and sculptures. Not only have certain places been storing the marks of some past stories, they have also retained a particular atmosphere that could be called energies or vibrations.
In my opinion, there is no place in the world able to preserve such an intact, strong and magical atmosphere as Venice. It’s as if history had been printed at a metaphysical level. As if the stones had absorbed energy from every past life. Not every ancient place can give back such a mystery and not everyone is able to sense it. One needs to be willing to listen and look for it. There are some hidden places in Venice where these energies can be found. They are itineraries off the beaten track where it’s still possible to stay alone and in silence, in the lights and shadows contrast given, bursts of light that make geometrical patterns on the stones. As it happens in Corte Muazzo where in a narrow and dark arcade there is a byzantine capital, dated from XI century, of rare beauty where strange animals figures and acanthus leaves are depicted. Out of the darkness appears some heads of strange esoteric creatures that guard this courtyard and it seems it’s not by chance. Some folktales tell that before the noble Muazzo family, who gave the name to the place, a congregation of people linked to the magical world such as wizards, necromancers and occultists had lived here.
On the other hand, it’s not necessary to know what happened here, it’s enough to stop here for a moment for sensing the magic or at least for imagining it.
This dark courtyard reminds me of the old and mysterious figures who seem to come from the dark canvases of the old masters. Here he is. I can almost see him coming out of the darkness. Francesco, I’m thinking of you now as ever!
“Come here for a moment and help me to make this lemon cake. It’s for you! But before, please sit down there. You should do nothing but be yourself. And then we can eat the cake”. Lemon Cake
Print
Author: Zaira Zarotti
Recipe type: Sweet, Dessert
Ingredients
For the Lemon Cake Layers:
*This cake should be high enough to be cut into layers. I’ve used a 15 cm/6 inch diameter pan with high edges.
For the filling:
For the Icing:
For decorating with Candied Lemon Peel:
Instructions
Cake:
Filling:
Icing:
Decoration:
*This method is a quick way to candy the slices and the lemon peel that will be needed to decorate the cake. It's better to make this a day before making the cake.
Final step:
3.3.3077 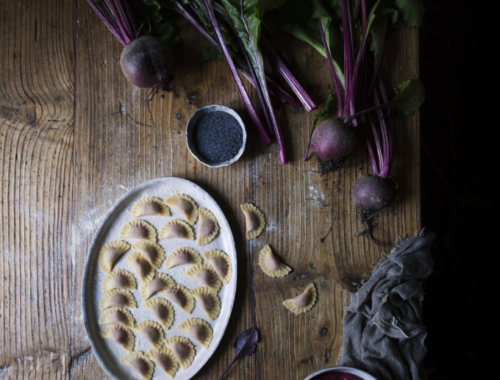