When I saw him passing near my kitchen window, he was still wearing his colour stained clothes. His fingers were dirty with black paint and he had his “studio” shoes on, the ones that he usually wears for painting and that are stained with all sort of colours. He was pushing the old iron cart overfilled with pumpkins.
My father is very much like me, and like me, he needs an escape route. He can spend days working in his studio, with admirable determination, relentlessly working on a canvass, until the anatomy of the horse he is drawing is perfect. He often enjoys painting horses and massive battles…..something simple, in other words!  Creative effort is one of the most tiring in the world. Those of you who have passed through it, can easily understand how exhausting it can be sometimes. It’s powerful and exhausting at the same time. I think that the energy used is the same as that used in doing something physically demanding, such as, for example, hoeing a field. I usually anguish over the creative phase until I’m satisfied with something, but if I can’t find anything, then, I feel terrible and want to throw everything out of the window, cursing loudly. But my father has found his escape route in the vegetable garden. According to him, it’s necessary, from time to time, to distance ourselves from what we are doing, otherwise, we run the risk of losing a sense of reality…. and then, the horses will be misshapen. I find this sort of attitude very zen.
And so, from time to time, I see him going towards the vegetable garden…..and sometimes, when he comes back, he looks more relaxed and with some plants in his cart or, like the other day, with some 40 astonishing pumpkins. He usually stops in front of my window to give me some freshly picked little plants or vegetables. Sometimes, we don’t see each other but, at some point during the day, I can see with the corner of my eye that there is less light coming through the window and… the windowsill is loaded with fresh vegetables, so much that, on some occasions, it is like looking at one of those small Flemish paintings, one of those Still Lifes in which the most perfect light seems to bring the subject out of the canvass.
It was he who taught me how to see the light on objects properly. He told me that a very small white dot if put in the right place, can light up the whole painting.
“Look closer!” he used to say, pushing me in front of a Still Life by Van Eyck, “Look even more closer!” And he was right. There was always one microscopic dot of light that at a closer look seemed to have been put there at random, but seen at the right distance, it was the secret of the painting’s brightness and of the wonderful skill that only the Old Master had.
I find myself staring at the pumpkins on the window. Here it’s Autumn, with its damp days and dim light. However, this kind of light makes everything look preciously beautiful, and it seems that even the humble and tough food – the type of food that has always been considered to be a blessing because it secured the nourishment for the whole winter – is enriched with grace. This is true for the pumpkins that, if stored on a wooden surface and in a dry place, can last for months.
I love humble food, frugal meals and local traditional recipes because they have their own noble simplicity.
For me, pumpkin gnocchi is one of those dishes that more often has coloured in orange my parents’ dinners with their artist friends, in front of a blazing fire and, every time, I was stunned by the speed my mother made the gnocchi. “It doesn’t take long, does it” she used to say sarcastically, while preparing a multitude of dishes that seemed to go on forever, and then, she would ask me to go to pick a bunch of sage or rosemary, the herbs whose scent was still in my little hands when I sat at the table eating and listening to the stories about some strange and bizarreVenetian painters.
I’ve learnt to make the gnocchi at the same speed as my mother’s…it doesn’t take long, afterall! It’s only necessary to have the right ingredients, above all, the right type of pumpkin that should have a dry, not too watery, solid and very orange flesh. The Delica type has always been my favourite and is perfect for this kind of recipes.
The method used here for making gnocchi is not the traditional one, where the dough is knelt by hand. This one is quicker and you only need to use a spoon and one of your finger for pushing a little amount of the dough into the boiling water.
“La crosticina” as we say in Italian, is the thin and crunchy crust made on the gnocchi by browing them in the pan with some good oil and herbs. This passage will make you regret having tried them because you will want more and more, forever more.
Thanks, dad, for giving me more than 10 pumpkins through the window because, in such cases, Providence is never enough. Crispy Browned Pumpkin Gnocchi Al Cucchiaio With Herbs
Print
Author: Zaira Zarotti | The Freaky Table
Cuisine: italian, regional
Ingredients
(5/6 portions)
*note: use a pumpkin with solid and not too watery flesh and some floury potatoes.
For the gnocchi:
For the sauce:
Instructions
3.5.3208 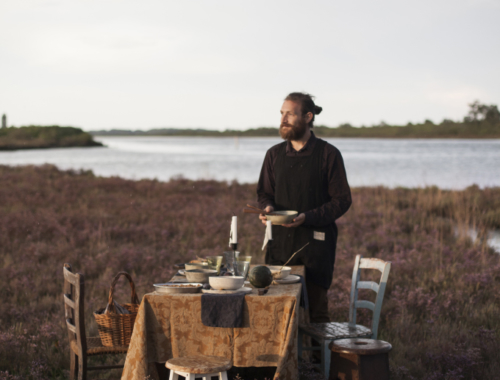 Before the rain, an intimate dinner in the Venetian Lagoon