A DREAM JOURNEY INTO THE NETHERLANDS Coming back home after a travel is something like a little trauma for me.
Inevitably, I feel myself changed; the discoveries, the new places and people I’ve crossed on my path made me a new person. I go back retracing my steps, one after the other, trying to keep vivid all the details I have stolen with my eyes.
Back home I find everything exactly as I left it, except for the garden that now seems lusher. Everything has remained still since the moment I closed the door behind me to go and explore The Netherlands for the first time! After meeting through Instagram and falling in love with each other’s work, Ingrid of the lovely blog Let’s Talk Evergreen and I decided to meet in real life.
Our long speeches via e-mail in my weird English grammar soon revealed our perfect connection, the same we immediately found when we met.
Ingrid & Rob, her sweet and funny boyfriend, came to see us here in Venice and spent a few days with us.
Here you can read Ingrid’s post to know more about the time we spent together exploring Venice and its islands, baking “Buranelli” (typical biscuits from the island of Burano) and drinking liters of coffee!
I’m going to talk, instead, about what happened afterwards, that is, our beautiful trip into The Netherlands. A few months ago Francesco and I had reserved our flight to Amsterdam, so that we’d go back to The Netherlands with Ingrid & Rob and continue our holiday together.
My expectations of this travel were quite simple: what I really desired was to enjoy some time with Ingrid and visit Amsterdam – this already seemed enough to me!
Instead, reality surpassed my expectations: thanks to Ingrid & Rob’s very warm welcome and kind attentions, we could explore much more of their country, travelling from one city to the other and discovering lots of amazing places, outside the popular tourist routes.
I have no words to describe how grateful I feel for every moment we spent together, for every laugh – and we laughed so much to have stomach cramps – and again, I have no words to describe how wonderful it is to find new friends who already feel like longtime friends, as if they had always been part of our life!
Ingrid & Rob welcomed us in their home, a little lovely place with large windows. On the shelves full of Ingrid’s props there were also some of our FreakyRaku ceramics.
The simple whiteness of their home – especially in the cold morning light – reflects so much Ingrid’s “Nordic and clean” photographic style. Accessing her private space and watching her at work confirmed me what I had already sensed through her blog: it is authentic and that’s why it is so special. There’s no fiction, Ingrid is exactly as her blog and her home: brilliant and cozy.
This is not a travel guide but only my personal story of our journey – just a way to share what I saw (and ate!). If you find some good tips among all these scattered thoughts – in case you are planning to fly to The Netherlands – you’re welcome to use them! *You’ll find my list of “top places to visit” at the bottom of this post! I wouldn’t be entirely honest if I said that I knew what Kingsday was before I left for The Netherlands.
What happened was that we stumbled across this very heartfelt National Holiday, which took place on April 27th. During this crazy day everyone wears orange clothes – the national color – and flocks on the streets giving life to the biggest street party of the year.
We spent this entire party day in Utrecht, Ingrid’s beloved city, amongst the crowded streets with a colorful and chaotic flea market, where you can find every kind of treasure and garbage. People sell their own cast-off stuff in the street in front of their homes, often using the spacious wooden luggage carrier of their typical Dutch bicycles as a table to expose the goods.
Utrecht surprised us for being a bustling city, crowded with young people, university students and full of new nice cafes where you can eat watching the canals and its boats or, in this case, crazy people dressed in orange and with a little king’s crown on their head!
About what we ate, what party would it be without tons of unhealthy delicious food?
The day began very well with a super caloric tompouce, a very popular Dutch creamy cake with an orange glazed top layer to celebrate the special day, and then we had frites and frikandel speciaal with sauces to take away for dinner. We were about to die of… too much happiness!
Amsterdam instead welcomed us with a super cold day in which a frozen rain got us holed up in a café, amongst the smell of freshly baked cakes and a warm cup of “espresso” coffee (No! No! Not even close to a good one!) in our hands to warm ourselves. Amsterdam is such a dream city and what impressed me is the serenity of the people who lives there. I am quite sure that this does not depend on the constant cloud of marijuana smoke you breathe everywhere, strolling in front to the thousand coffee shops along the canals. I rather think that the quality of life there makes the real difference. Everywhere I sensed welfare. Although their extreme permissiveness makes The Netherlands one of the most “transgressive” countries in Europe, my impression has been that of a moderate country which strictly respects the rules. Italians are culturally used to looseness towards the rules so – just for fun – we defined Dutch people “incorruptible”, just to express the diversity which makes our two countries so similar and yet so different.
I could write four posts just about Amsterdam, extolling as many similarities with Venice and its canals as you can find and telling you how I can’t resist looking inside the big windows every Dutch house normally has. No one cares about privacy.
I could also write an entire post about the timeless wonders that you can see in places like the Rijskmuseum. No doubt, this is the land of inspiration for me. Masters of painting and light like Rembrandt and Vermeer were born here… no need to tell you how excited I was about it. There’re no better place in the world where one can admire – through the Dutch painters’ masterpieces – an immense knowledge of painting and composition. We visited Rembrandt’s house where, after climbing some creaky narrow wooden steps, you can visit what used to be his studio. Each Atelier feels like home to me: I find the same scent of cooked linen – just like in my parents’ studio – and the same brushes, made of natural bristles and tied with a string, as they used to make them in the past. All houses grow upwards, so you can easily find yourself on the fourth or fifth floor, under a very sloping roof from where you can see the whole city shining among its endless waterways.
Those waterways flow into the North Sea where one day, when we were riding by car in the middle of the country in search of tulips, we stopped for a walk on the seashore. Tulips are the strongest image I cherish from this trip: endless colorful fields in the province of North Holland. We walked amongst red and purple velvet at sunset, a dream I often visualize before sleeping.  I can’t help but asking myself if the brilliant colors of these endless landscapes influenced Vermeer’s painting. His hometown Delft is surrounded by a sea of tulips. Its historical center still holds an old-time fascination and a sort of slow rhythm which may be due to the quiet flowing pace of its canals. It was precisely on the bank of one of this canals that we sat to eat some very good fried fish from De Visbanken, one of the oldest fish stalls in Delft, dating back to 1342! Delft seems a sort of little Amsterdam – less chaotic than the big one! – and it is well known all over the world for its hand-painted white and blue “Delfts Blauw” majolica. Transportation is quite expensive in The Netherlands but Francesco and I went on a small trip by train to Rotterdam, thanks to the daily pass Ingrid gave us (bless you!).
Rotterdam was razed to the ground by bombing during World War II and it was completely rebuilt between the 1950s and the 1970s. The “new” city looks futuristic today. Avant-garde architecture – very strange and fanciful at times, as in its cubic houses – gives it a very different aspect and spirit from every other Dutch city. Although I love modern architecture and appreciate boldness in urban contexts, I must say that I didn’t like Rotterdam very much. Historical dramatic facts – especially if they are as dramatic as the ones which happened in this city – remain in the soul of a place… I remember feeling the same in Budapest, which was also almost totally rebuilt after the war. I left Rotterdam with a desire to dive into  a “lighter” place. A very beautiful feeling of peace and quietness embraced me as soon as I saw endless green fields with windmills from the train window.
These endless and soft fields – where sometimes we sighted groups of hopping hares – accompanied us back “home”, that is, back to the little and nice B&B which we had booked by chance in one of the best places I’ve ever seen: Broek in Waterland.
It is such a lovely place that I decided to end this post by telling you about this little dream town, our quiet refuge from the city at only 6 Km from Amsterdam.
Walking through Broek in Waterland is like walking through a picture postcard. In the seventeenth and eighteenth centuries this picturesque village was one of the most prosperous villages in the region and it attracted rich merchants, ship owners and captains who wanted to live outside Amsterdam. They had grand houses built with magnificent interiors and the monumental wooden properties are recognizable by their pastel colors. If I had to think about the most idyllic place I’ve seen, this village would be the first one of the list… and maybe also the first one of another list of mine – that of “dream places to live in”! I’d really recommend a visit. Thinking it over, maybe it is not true that everything has remained the same as we left it here at home. Small traces of Ingrid & Rob passing by have remained, like the chocolate they brought us and the stroopwaffel which Francesco never misses a chance to eat! They are still on the cupboard… as a proof that it was not only a dream!

Some of the places where we have been which we really loved! 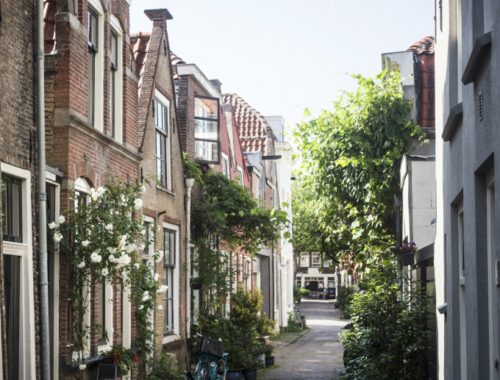