“When I was your age, I’d a boat. It was a punt, you know, one of the most common boats in the lagoon. In Venice, everybody had one. I used to row for hours to get to some of the quietest places in the North Lagoon. I would go there to paint. I would stay the whole day and sometimes even during the night. But other times, I would only go there to fish. In those days, there was no need for fishing licenses or navigation permits because everybody went fishing in the lagoon, your granddad, my father, and even your great-grandfather did. Once, when it was the time for cuttlefish, I went fishing on a summer night. Do you know how to do it? You go at night time and illuminate the water with a lamp and then wait for the cuttlefish to arrive. The fish is drown by the light. That night there was no one else around because it might have rained but I went regardless… and I did the right thing. In the first half hour, I had caught about thirty fish. The water was full of them and more were coming. All the cuttlefish wanted to get into my boat! But do you know what happened next? Suddenly, all the cuttlefish disappeared. The water was still and I couldn’t see any single fish. I leant on the side of the boat reflecting my imagine on the black water and do you know what I saw? …Two transparent, huge, yellow eyes staring at me. Really big, you know! They were as big as two tennis balls and were completely still and looking at me. Do you know what I did?…I moved very slowly and turned the light off. I grabbed the oars and…went! I dreamt about those eyes for ages. Then, one day, I went to the port authorities to ask what kind of fish it could have been because I had never seen something like that. They showed me some pictures from a book and it came out that it was a stargazer. I don’t know but in my opinion, it was something else…such a horrible thing it was. A sea monster!
The first I heard of this story I was just 1 meter tall. I was holding my dad’s hand while trying to keep up with him on the Rialto Bridge in Venice.
I can still see myself as a little girl, opening my eyes wide, as two tennis balls like those of the stargazer fish, while listening to my dad as if he were a sea god.
We were living in a typical Venetian house in Calle dei Pirieta, in the St. Mark area, the sestiere di San Marco and like many Venetian families, we used to do our shopping at the Rialto market, one of the oldest market in the city and a landmark for eating and drinking.
Before us, there were my grandparents who did their shopping there and before them, my great-grandparents and who knows how many other generations before that. My dad’s family is one of the oldest Venetian families whose origins go back to 1300. Holding my dad’s hand and skipping on the steps of one of the most famous bridge in the world, I was retracing my ancestors’ steps but I was too little to realize it.
The traditional Venetian cuisine was, and still is, mostly based on ingredients that could easily be found in the lagoon, like the fish. Almost every family had a boat and fishing in the lagoon had been one of the most ancient and widely spread activities for sustenance. My grandfather told me about the abundance and quality of the fish found in the lagoon. There was so much of it that fishing it was seen as something good. I also heard that flying fish could easily jump into the boat, like in the film “Life of Pi”. Tales, maybe… but my child eyes opened even wider.
Thus my family, for the sake of our culinary tradition but also as a choice, has never eaten a lot of meat, favoring the local fresh fish instead. I have spent the afternoon with my ninety-year-old grandmother Edera (known as Eda), going through a box of old photos, searching for the history of my family in Venice from the beginning of the 1900s till now.
Today, there is an old black and white photo in a small wooden frame hanging on the kitchen wall. I have found it in a pile of old photos. It shows an ancient Venice that today doesn’t exist anymore. I look at my young grandparents, in their twenties, in a photo that tells of their love story in a very simple way. It tells also of a Venetian lagoon, calm and still, that is so rare to see it today. I see the wooden boat which my dad talks about in his stories and then, in the background, Venice with the same skyline as usual, yet deeply changed. I wish I could have seen Venice as it was in the past, before mass tourism grabbed it. I wish I could have walked along the deserted Calli and have taken a boat ride in that same boat listening to the sound of the water stirred by the oars. One can’t go back in time, but today I feel happy regardless, because I feel I have a direct connection with everything that has been before and that, somehow, belongs to me. I can see myself in my grandfather’s outlines, which is so similar to my father’s. I can see myself in that calm lagoon, in the same way it’s still possible to find in those parts of the city which aren’t very busy with tourists. But above all, I can see myself in my grandmother’s smile, from whom I have taken the same colour of the eyes and maybe, even a bit of the love for the Venetian cooking.
Today, it’s still possible to fish in the lagoon although the pollution and the congestion of boats, public transport and large ships arriving in Venice is having a tremendous impact on the fragile ecosystem of the lagoon. Even the Rialto fish market has changed. It’s very touristic and is getting smaller and smaller. Despite all this, the Adriatic Sea is still very rich in fish. In fact, it’s one of the most fertile in the Mediterranean and supply more than half of the Italian fresh fish.
Venetian families eat fish often, preferring oily fish such as sardines or anchovies but also shellfish such as mussels, brown crabs and king scallops which are part of traditional Venetian cooking. The two recipes that I’m presenting here, are very easy and quick to prepare and are often found in the old Venetian Osterie, known as Bacàri in the local dialect, where one can eat some Cichetti, which are nibbles of some local specialty foods to eat with an Ombra di vino, (a small glass of wine) as we say here. The story goes that in the past, the street sellers who served the wine in St. Mark’s Square, used to follow the shadow made by the bell-tower so that the wine could be kept cool. From here the custom to call a glass of wine, Ombra which means shadow. Drinking an Ombra, in Venice, is something like a social ritual and the same goes for eating a Cichetto.
Here, gratin mussels are called Peoci al forno, and are the poor version of the gratin king scallops that are made in the same way but that are more delicious and much more valued. Among the different varieties of the Cichetti, there are also the small octopus, known as Moscardini, but locally we called them Folpeti. Usually, they are served cold, with oil, salt and pepper and some white celery cut in small cubes. My version is more slightly summery, seasoned with pink pepper and fresh tomatoes.
All served with an Ombra of good wine, maybe two… Then, if you see two big and yellow eyes staring at you, it means that the wine is really good.
It doesn’t necessarily means that you have drunk too much. 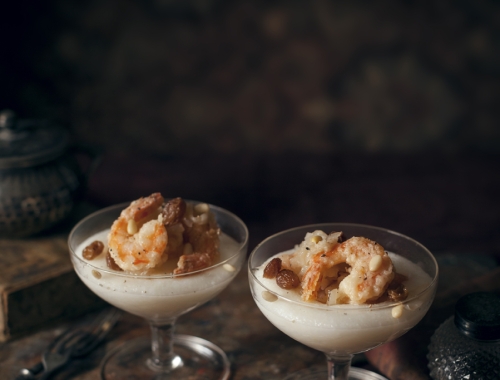