Potions, cakes and magic with a scent of Helichrysum 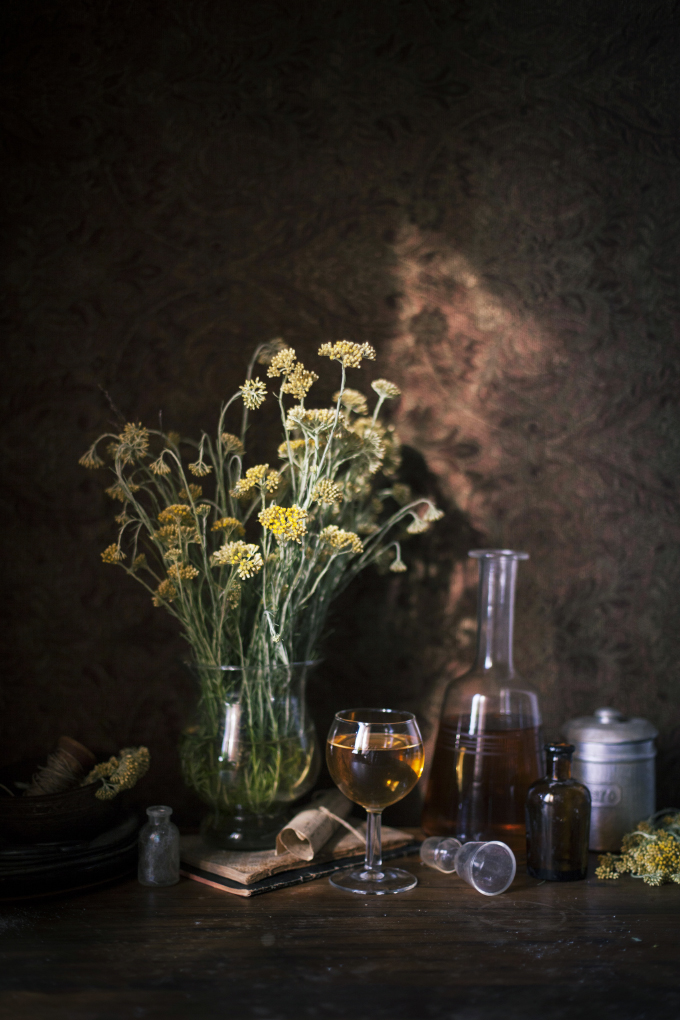 Smells accompany us throughout the course of our life, often linking us to very specific memories.
There is the incomparable, unique and special smell of home, welcoming us as an embrace every time we cross the threshold.
There are indissoluble and powerful smells which are linked to our childhood and take us on journeys outside space and time.
We try to keep them in our memory, often with the feeling of having irremediably forgotten them, but if we are lucky enough to smell them once again, we suddenly become certain that actually they’re unforgettable, recorded in our olfactory memory as a safe place to  come back to. 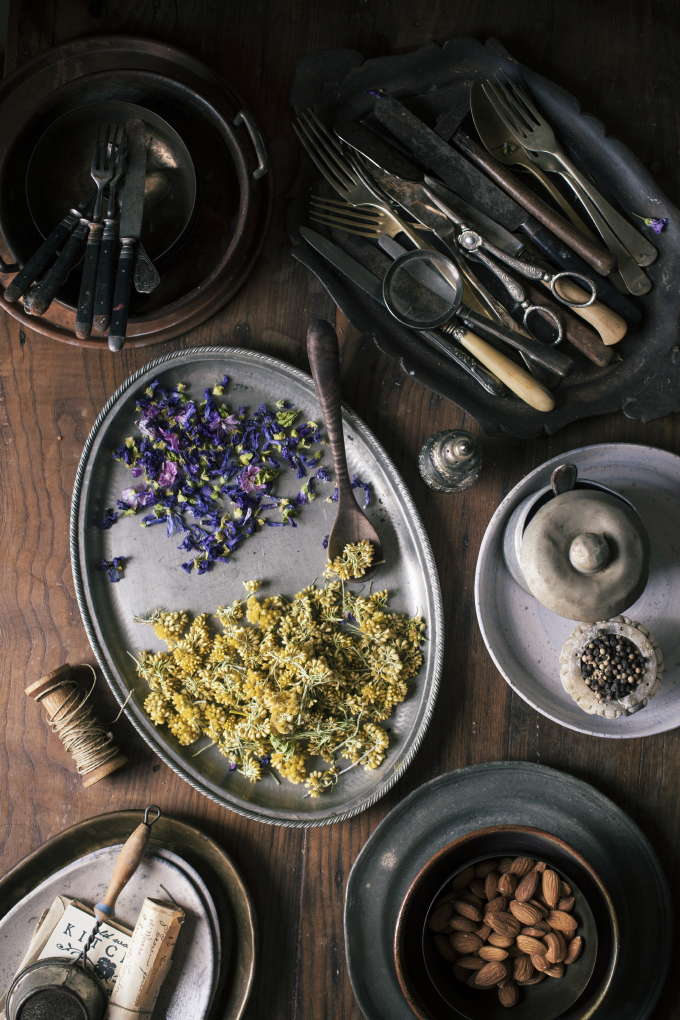 The warm June air smelled of dry grass and licorice when I walked uphill with my little baby feet, along the village street leading to the castle. The Stone-man was waiting for me up there, with his frightening mouth that plowed deep into the great rock.
I was sure to die every time I passed by, chewed by his horrible teeth, and then thrown into the cliff like a chewing gum.
With his disgusting mouth, his fern and moss hair and those small, dark eyes that I felt pointed at my back as I ran at breakneck speed on my way home, the Stone-man today is still there… and in the end, after all these years, I can say he is quite harmless.
Now, when I find myself in its presence, I look at it with respect, at least for all the years that it’s been bringing on its great millennial hump, and I consider it like a sort of guardian at the foot of the Medieval castle of Montemassi.
That unmistakable smell of dry grass and licorice – which only many years later I discovered coming from a wild plant called Helicrysum, which is present in the Mediterranean vegetation almost like a weed – always brings me back the memory of the castle and the Stone-man. 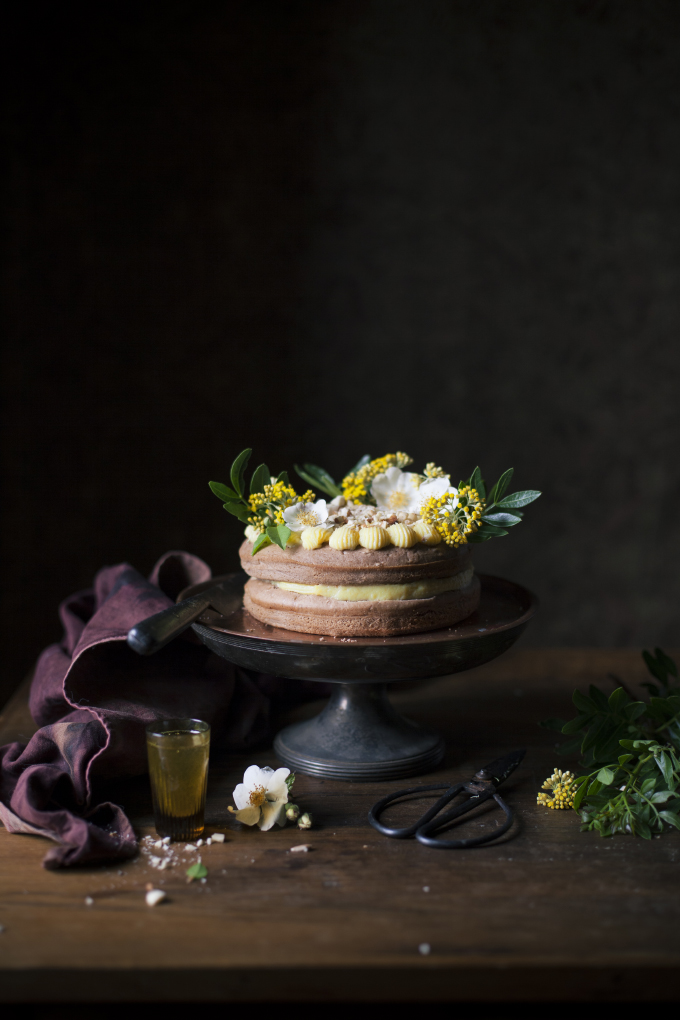 It is so rare to smell this scent in Venice, because Helichrysum is a plant that is hardly found in northern Italy. In fact, in my olfactory memory, this smell hovers exclusively on the background of all my summer adventures in Tuscany. It represents to me the smell of freedom, of wild life and of a slow, intensely lived time.
During my solitary creative retreat that I recently granted myself in the house of Montemassi that my family owns for over 30 years now, this smell of Helichrysum accompanied me all the time and catapulted me into a dimension which is closer to dream than to reality.
Lost in the endless time of loneliness, I allowed the deafening silence – which was interrupted only by the chirping of swallows – pervade deeply into my spirit, to the point of making me feel nothing but my thoughts.
I worked a lot following the daylight and I found a clarity of intent that I had lacked for a while.
The dining room window overlooks the world – literally on a landscape where it is easy to get lost, up to where the view extends. I watched so much the small lights on the horizon that light up at night as a sign of distant civilization. During the day, the haze slightly veils the hills and brings gusts of hot and sweet, aromatic air. The air’s thick with Helichrysum and I breathe with my mouth, wishing I could eat that perfume. 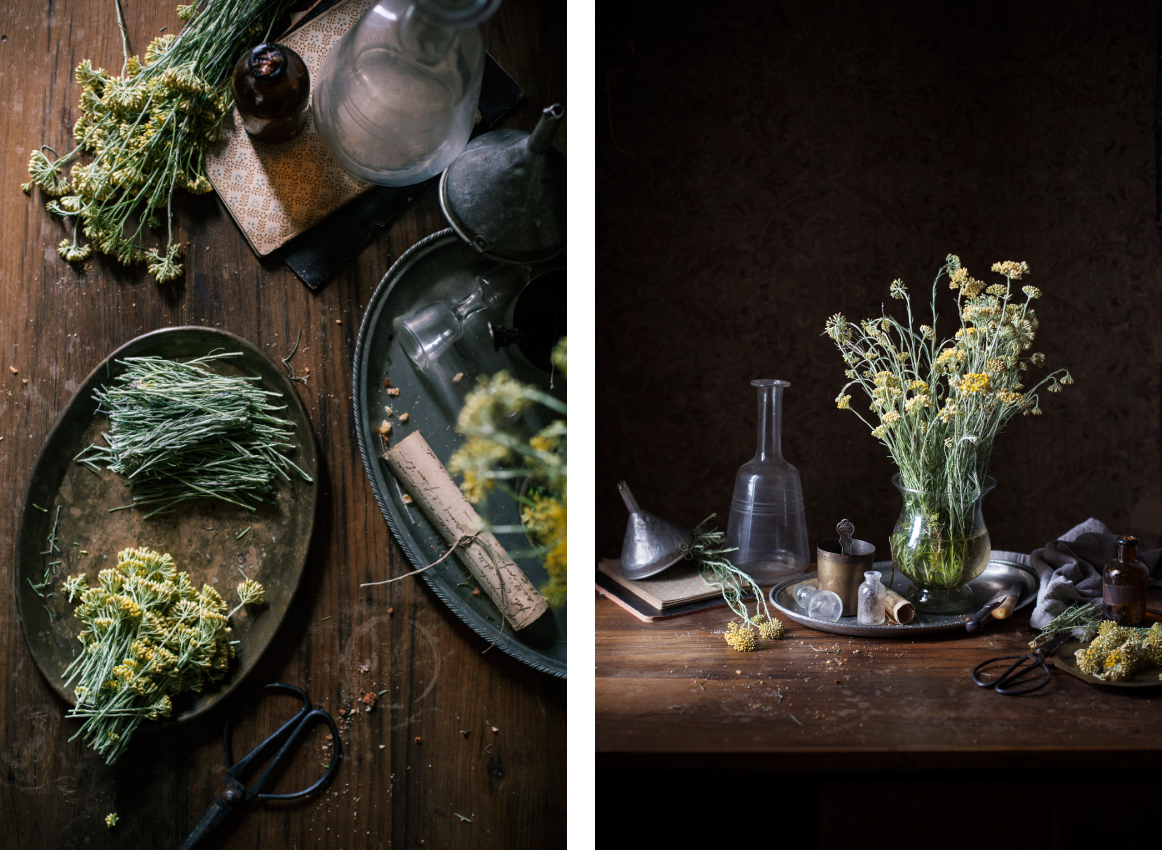 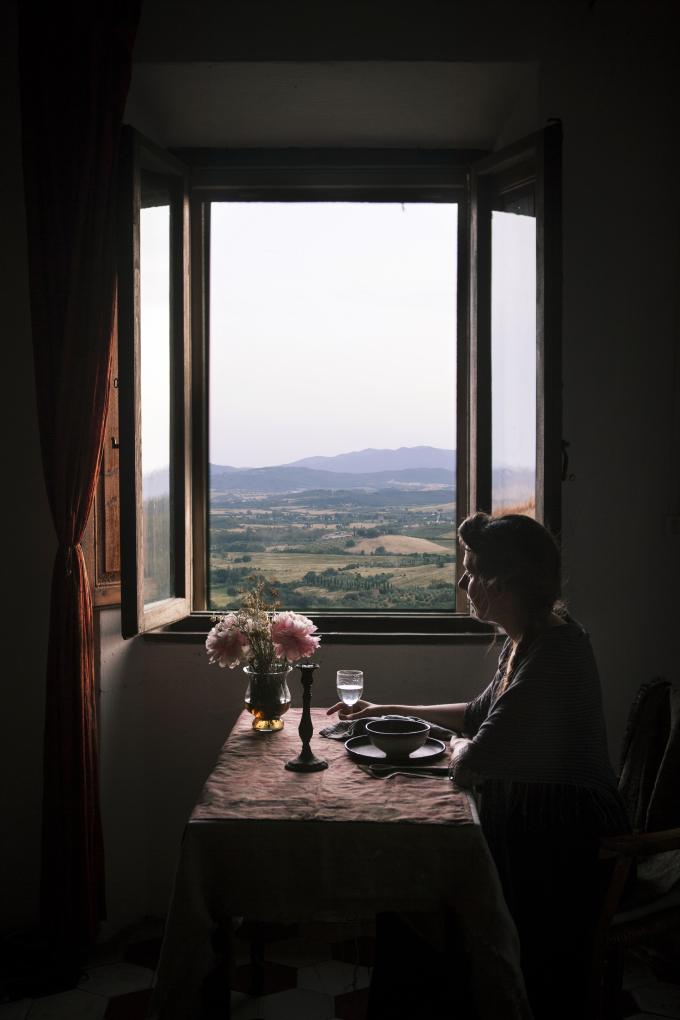 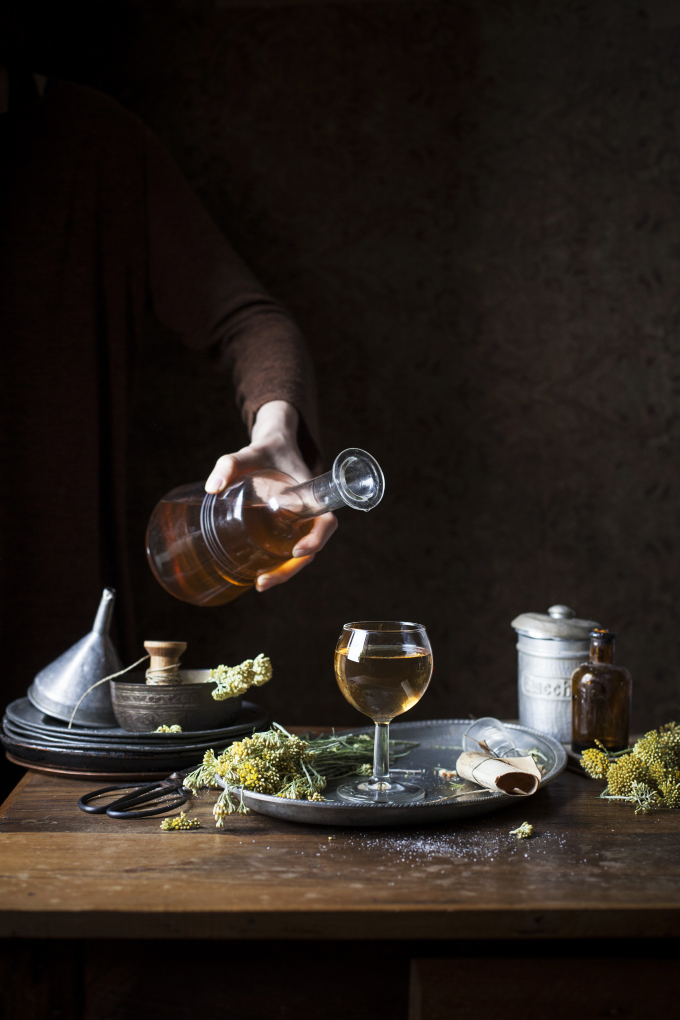 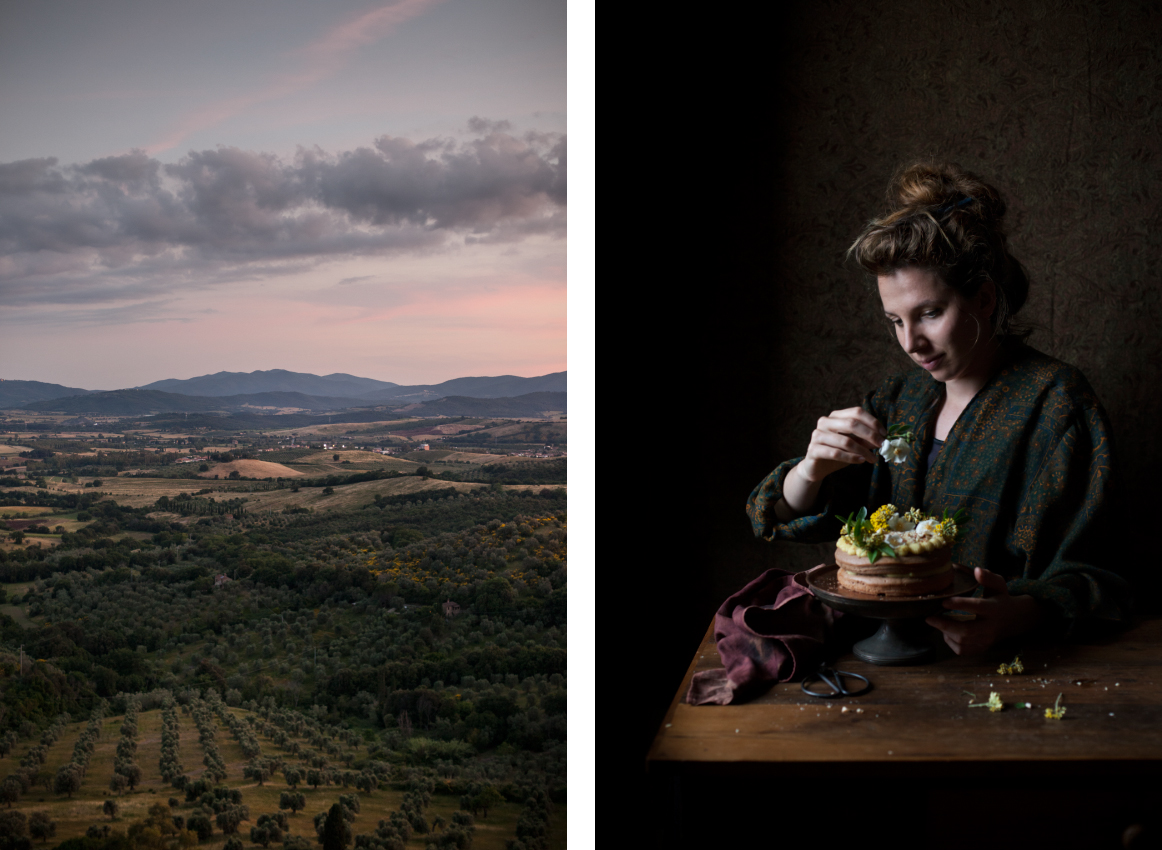 It was then when I had a stroke of genius.
When I ran to him, certain of being able to face him as an equal, ‘cause I’m big now, my bones are no longer fragile and appetizing.
His once green and fat hair is now dried up. He wears a crown of fragrant yellow flowers, and he’s majestic. He allows me to pick up a little of his hair, and I notice how his temper has softened over time, just like it has happened to my Grandpa, as well.
It was when I said goodbye, running down the hill, with his stone-eyes pointing at me, just like he always did.
Days of potions in the kitchen followed, to enclose in a bottle the smell of childhood which was studded with fantasies on a stone, when Magic always was a concrete means to realize the craziest dreams, when freedom had the scent of Helichrysum. 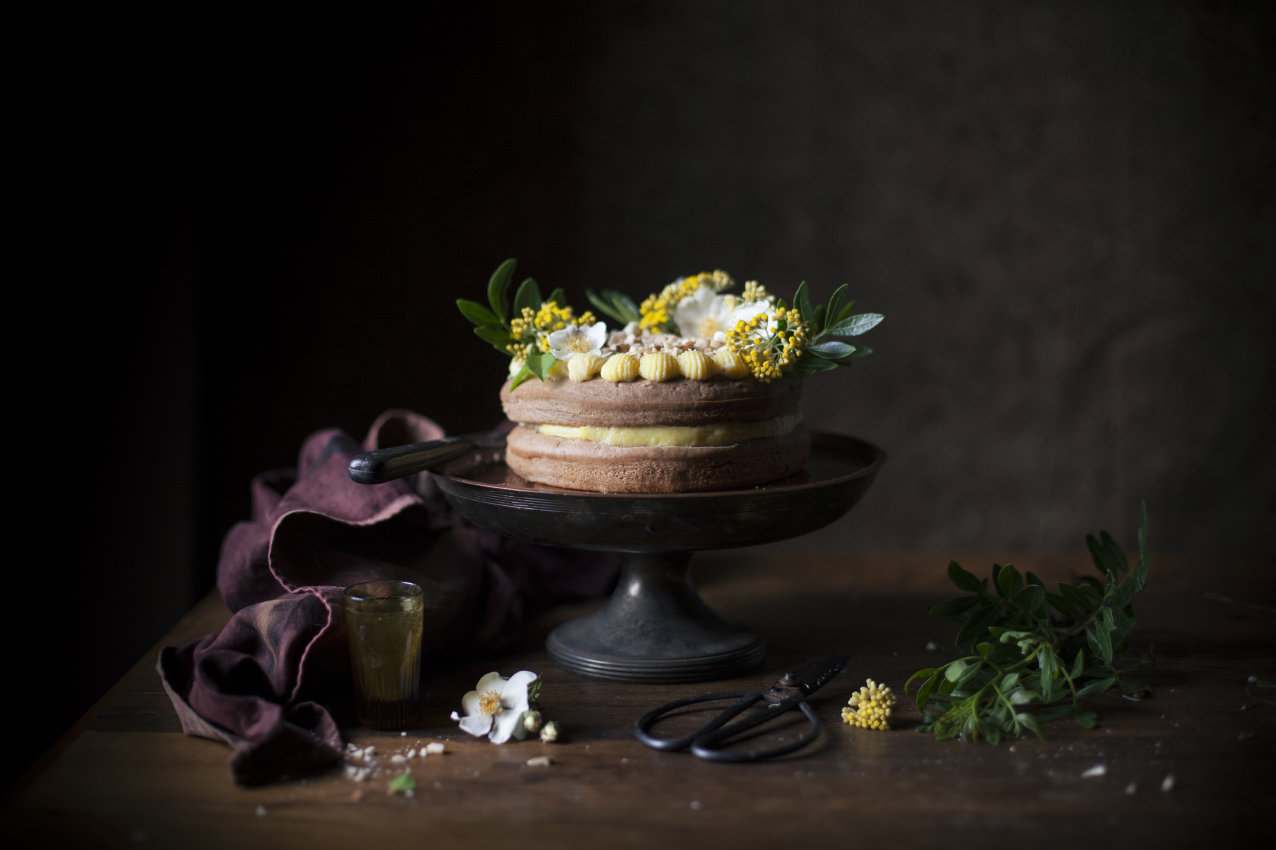 Homemade Helichrysum syrup & cake
Print
**** Be careful to use Helichrysum italicum (a flowery plant of the daisy family Asteraceae), organic, picked in unpolluted areas, clean and in perfect condition. Helichrysum can be harvested from June to July, when it is in bloom. Its properties are mainly indicated for the respiratory and skin apparatus, it is also an excellent natural antihistamine. To make this syrup, use dried Helichrysum, so just leave the branches without roots and the flowers to dry upside down in the dark in a warm, dry environment.
Author: Zaira Zarotti | The Freaky Table
Ingredients
Homemade Helichrysum syrup
Helichrysum cake
*(I used two 9 cm diameter cake molds)
Ingredients for the filling:
Instructions
FOR THE SYRUP:
FOR THE CAKE:
3.5.3251 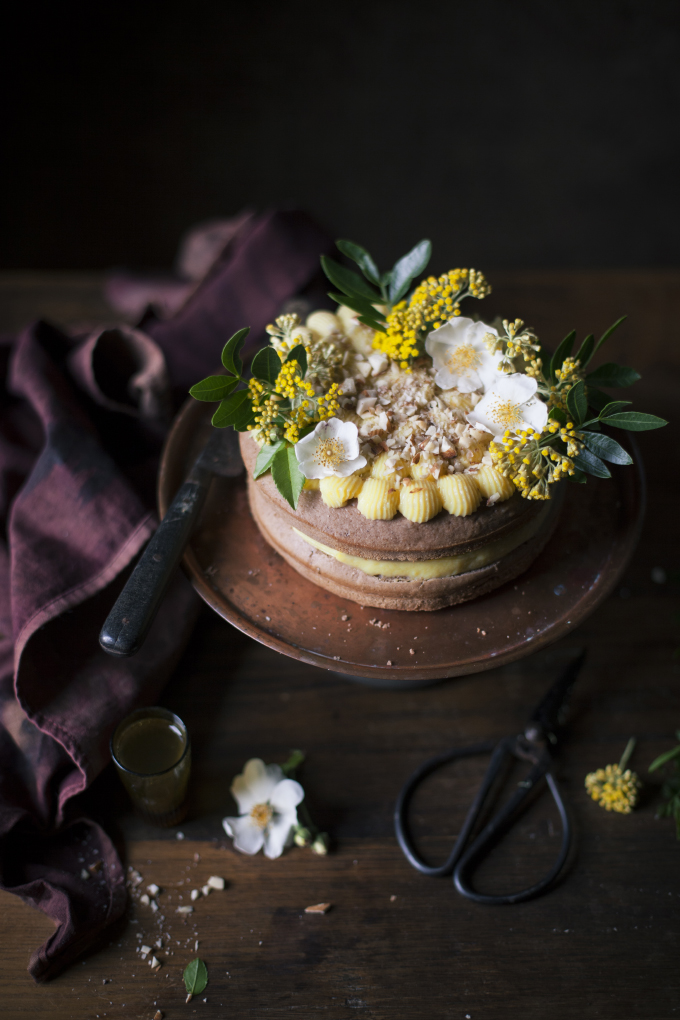 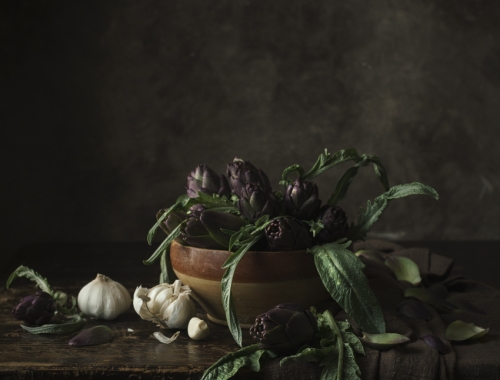