Inspiration. But what exactly is inspiration?
Never in my life have I ever asked this question so often as during this past year.
Being inspired seems really an important issue. Inspiration seems the reason for doing something in a certain way rather than another. A very simple question with a very complicated answer.
I don’t want to discuss further on this but the inspiration of the moment, I mean the one that makes you choose what to do and how to do it is certainly the number of many important and meaningful moments in our lives. From the more trivial things to the more significant ones, which doesn’t mean they are the most important ones. Our daily life is a constant source of inspiration for everyone, without exceptions.I don’t think I need to clarify it because I think it’s getting clear from my posts that I’m not very interested in writing about food. Actually, I find it extremely boring. Maybe because what inspired me to do this work was not the recipes themselves but the photographic representation of them.
Getting to the point of being in front of what was once just an abstract idea is what drives me to start my little daily circus. To build a set and then, very slowly to mess up the studio…what a terrible mess! One day I would like to make a time-lapse film of a typical day of mine and then watch myself over two minutes as I run around and move objects like a twister out of control.
But the beauty of all of this is that, sometimes, inspiration comes from some totally unexpected objects such as an old wooden box thrown away in a pile of junk and so worn out it’s almost crumbling to the touch. Who’s ever noticed before…? When my eyes fall on such items that for some reasons they seem to be calling me to be saved, this is inspiration! Something so trivial is enough for me and the day is done. I can see the set is ready. I can see the perfect recipe and I see the right light. It’s a downhill path. It’s enough to align ourselves with our own idea, and pursue it patiently until we can see it building up.
When everything is going so well, when inspiration gets hold of you like a kind of euphoria, you’ve done it. Nothing is more beautiful and my day really changes. Everything seems to be going right.
In a few situations, someone has seen me rushing away only to return with an old wooden flatbed under my arm, or even better, with 45 kg of a rusted iron sheet. These are the secrets of a food stylist: to see in certain objects an exceptional idea, and being inspired by the simple things that may be around!
And speaking of things that we may have around: my garden is exploding with yellow cherry tomatoes. It’s outrageous that I don’t even have the time to eat them! Then, the next day there are even more to pick. They are so beautiful that it’s easy to get inspiration for a recipe.
Towards the end of April, I went to buy the little plants from an old agricultural consortium in my town. I caught myself dreaming about picking tons of wonderful tomatoes, well, here they are now. I wanted them and now I shall eat them!
Baked tomatoes are delicious, even if I almost died in cooking them. This is one of the hottest summers in recent years for the North of Italy, so much so that my town has recently been partially destroyed by a tornado. If you want to read more about this and about another recipe with tomatoes, you can follow this link.
In short, turning the oven on with an outside temperature of 40°C was not one of the most brilliant ideas, but in the end it has been worth it.
The oven had to be on for two hours because it is in cooking them slowly that these tomatoes dry out well and become almost dried tomatoes and they are very tasty. This way you can also keep them in a glass jars filled with oil, and I assure you they are excellent. They are even better than the sundried ones because they remain soft. Anyway, I’ve eaten them all before I could store some away. I’ve no need to tell you how much Italians like pasta. It is one of the dishes regularly eaten, often eaten daily, from the North to the South of Italy.
I’m not a big eater of pasta and when I eat it, it’s enough as a main meal for me. So when I decide to have pasta, I prefer to choose whole wheat pasta, which is much more nourishing than the white wheat refined flour. Therefore, the type of pasta I’ve chosen for this recipe is whole wheat spaghetti. They are perfect for the anchovies crumble to stick to and give a crunchy touch that is a distinctive trait of this pasta dish. Now that I’ve introduced the recipe, I can carry on about the styling of photos, because in front of the set I had a realization and I felt a pretty marvelous person.
To prepare the setting and do the cooking is not so relevant, or rather, I always do it and I don’t think I’m the first nor the last. But growing your own vegetables and bringing it to the table is increbibly rewarding.
Creating a connection with what you eat and to take part in a small natural cycle is an ancient and primordial ritual. If this cycle were rediscovered and adopted as a way of life today, it would also be a way for feeling more independent, free, and an escape from today’s system of production.
The next step has been to see what I’ve grown and cooked, displayed in the dish that I’d handmade (the oval in the photo) starting from the same soil that gave nourishment to my vegetables. Returning to the archaic things is a sort of a poetry from which contemporary lifestyle has been separenting us for a long time. For me, it’s an incredible pleasure to rediscover it today and to do what I really like doing. I realize, of course, that this kind of utopia is only a privilege that I have in this precise moment of my life.
As I realize that inevitably, there is a very sharp contradiction in all the preaching about the wonder of a slow and simple lifestyle, for the simple fact that this is not entirely possible.
The world runs fast and it is easier to lengthen the stride and catch up rather than staying behind and trying to relax for a moment.
But it is only when we are given the opportunity to use our time in an alternative way that we can give the right importance even to the little things of everyday life and, certainly, this is a matter of fact today.
So, after having invested time, energy and work, I’ve finally reached the point of enjoying of my results. Has it been worth it? Of course it has, because along the way, one learns many things.
Not only to grow plants, bake clay or feeling a little more self-sufficient. But also to feel more connected to the reality we have around us. Living our time, here and now, in the beauty of every imperfection.

Spaghetti With Caramelised Cherry Tomatoes & Anchovies Crumble
Print
(Serves 2)
Author: Zaira Zarotti
Recipe type: Pasta, Lunch, Gatherings
Ingredients
Instructions
For the baked tomatoes:
*note: The tomatoes can bake either whole or cut in half but I suggest to do it separately. The whole tomatoes dry less and are better to use as a pasta sauce. Those cut in half are delicious to be stored in a jar with oil.
For the pasta:
3.3.3077 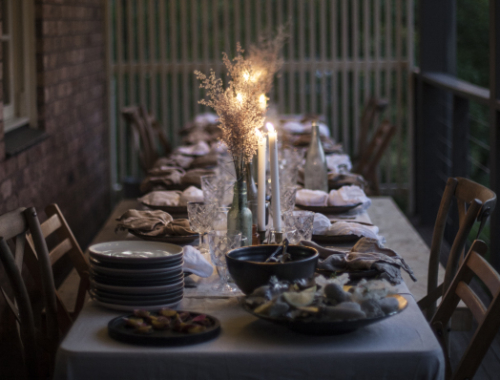