Where we are or how many kilometers separated us from the places of our roots does not matter.
The places where we belong follow us forever. Our life story is deeply linked to some situations belonging to us and, in some way or another, they always come back. A faint attraction leads us towards what naturally feels closer to us, often it happens by chance but most of the time we feel like butterflies drawn to a light. When I was away from home, I looked around me for everything that could take my senses back home, not for a sort of nostalgia but to discover some new spaces where I could find my roots again, even if only for a few moments.
One day, while I was in the Cafè de l’Industrie in Rue Saint Sabin, in Paris, pretending I was a perfect Parisian but actually knowing only Mercì and Bonjour, I overheard a group of Americans talking about “European culture” in a totally stereotyped way. I listened more carefully without bothering about being discreet and understood that these people had recently arrived in Paris, after having spent a short time in Italy, in Rome.
They were chatting while drinking coffee, praising la dolce vita and were talking enthusiastically about the attitude, which according to them was typically European, of facing life as it comes, without worrying too much.
Being Italian I could quite agree with them, after all, even if we feel a bit annoyed about it, I believe it is quite true that in some ways, and depending on where one lives in Italy, the Italian lifestyle is more relaxed compared to others. Look at me for example, I was sitting there, my Metro pass in my pocket, waiting only to make up my mind about what I would have done that day. I wasn’t on holiday. I was in Paris because I wanted to learn something. I wanted to live for some time sunk into a different culture; “European” yes, but deeply different from mine.
I felt I was free to do anything I liked with my life; free to be anyone I fancied.
That morning I decided I didn’t want to keep getting confused with the young Parisian women in that cafè anymore and I wanted to do something that could make me feel closer to the places I came from. A few months earlier in Venice, I sat on a creaky old wooden stool in my father’s studio listening to him telling about the time he had lived in Paris. A young lad in his twenties, he traveled to Paris with little money in his pocket and his drawings in a folder like many other artists had done before him to study at the Académie des Beaux-Arts. In a pile of drawings made on some yellowed old papers, a small black-and-white photo of that time, took me back fifty years, as a frame of an old French film. If there was still such a place somewhere, I had to find it. Now, to report here about how that morning went, beginning from the cafè I was sitting, then stopping at the Gibert Jeune art shop to buy a sketchbook and some pencils, till I arrived at the main entrance of the “Académie de la Grande Chaumière”, is irrelevant. To enter the door that had witnessed so many of the most famous European artists come and go, was like entering a space between being far from home and following the thread of the many stories I had heard.
Once inside, I could be anywhere. I could be at home, in my father’s studio, among the rolled papers, the small bottles of paint thinner and the scent of dried orange. The romantic yet decayed atmosphere of that place was still the same.
I went up an uneven staircase made in pale blue wood and found myself inside the photo I had held in my hands some time before but a full-colour one….and what colors they were! A model with a feather in her hair was preparing to pose for a real-life drawing lesson, while students coming from all over the world, were adjusting their sketching papers onto some old, worn-out wooden boards.
The small room was crowded with contemporary faces and dresses. The floor was squeaky with dark marks here and there.
I attended the lesson like it was a theatre play. Without knowing what I was doing, I traced a few lines on the paper but my eyes couldn’t stay still on the sheet. I put down the pencil and peeled the orange I had in my bag and then I spent the rest of the hour looking around. Everything looked fin de siecle, from the windows to the shelves where there were some old dried brushes to the beautiful wooden floor worned out and stained, like the floor in my home.

I can imagine you, dad, here. A young man with watchful eyes, moving your hand softly while sketching something quickly on the paper.

I’ve moved far away now and have almost forgotten that small room but its atmosphere is still part of me and always comes back. It comes back to me in seeing some old painting equipment and art objects left on the wooden tables and when I smell the scent of orange in my hands. Again, it has come back in this cold winter afternoon too, while I’ve been preparing this pudding to eat warm while having a reminiscence break. 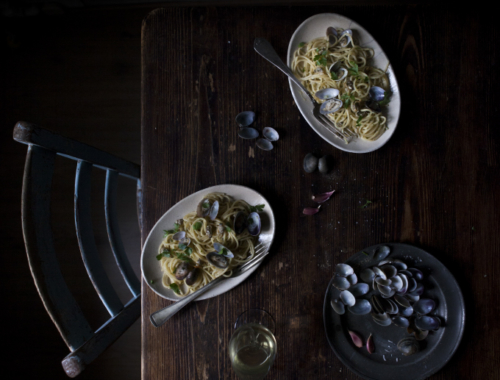 Lost in the fog: a boat trip in the Lagoon and a dish of spaghetti con le vongole